Smoke detectors or Smoke alarms are important safety devices, because of their obvious potential to save lives and property. There are two types of smoke detector commonly available in many countries.

One type uses the radiation from a small amount of radioactive material to assist in the detection or presence of smoke particles. These "ion chamber smoke detectors" are popular, because they are low power, inexpensive and are sensitive to a wide range of fire conditions.

The other type of detector does not contain radioactive material; it uses a photoelectric sensor to detect the changes inside a sensing chamber, caused by smoke particles. 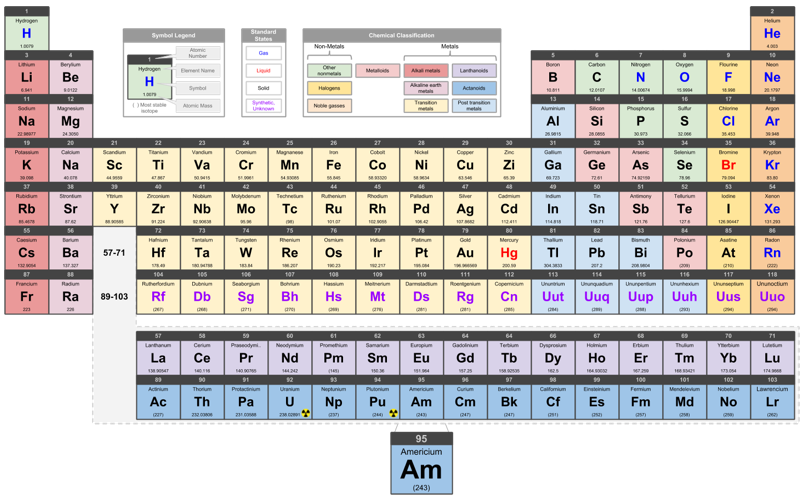 The vital ingredient of ionisation smoke detectors or smoke alarms is a very small quantity (<35 kBq) of americium-241 (Am-241). This element was discovered in 1945 during the Manhattan Project in USA. The first sample of americium was produced by bombarding plutonium with neutrons in a nuclear reactor at the University of Chicago. Americium is a silvery metal, which tarnishes slowly in air and is soluble in acid. Its atomic number is 95. Its most stable isotope, Am-243, has a half-life of over 7500 years, although Am-241, with a half-life of 432 years, was the first isotope to be isolated.

Americium oxide, AmO2, was first offered for sale by the US Atomic Energy Commission in 1962 and the price of US$ 1500 per gram has remained virtually unchanged since. One gram of americium oxide provides enough active material for more than 5000 household smoke detectors.

Americium (in combination with beryllium) is also used as a neutron source in non-destructive testing of machinery and equipment, and as a thickness gauge in the glass industry. However, its most common application is as an ionisation source in smoke detectors, and most of the several kilograms of americium made each year is used in this way.

The alpha particles emitted by the Am-241 collide with the oxygen and nitrogen in air in the detector's ionisation chamber to produce charged particles called ions. A low-level electric voltage applied across the chamber is used to collect these ions, causing a steady small electric current to flow between two electrodes. When smoke enters the space between the electrodes, the alpha radiation is absorbed by smoke particles. This causes the rate of ionisation of the air and therefore the electric current to fall, which sets off an alarm.

The alpha particles from the smoke detector do not themselves pose a health hazard, as they are absorbed in a few centimetres of air or by the structure of the detector.

The radiation dose to the occupants of a house from a domestic smoke detector is essentially zero, and in any case very much less than that from natural background radiation. The small amount of radioactive material that is used in these detectors is not a health hazard. On the other hand, the ability of domestic smoke detectors to save life and property has been demonstrated in many house fires.

Even swallowing the radioactive material from a smoke detector would not lead to significant internal absorption of Am-241, since the dioxide is insoluble. It will pass through the digestive tract, without delivering a significant radiation dose. (Americium-241 is however a potentially dangerous isotope if it is taken into the body in soluble form. It decays by both alpha activity and gamma emissions and it would concentrate in the skeleton.)

Plutonium-241, which is about 12% of the one percent content of plutonium in typical spent fuel from a power reactor, has a half life of only 14 years, decaying to Am-241 through emission of beta particles. Am-241 has a half life of 432 years, emitting alpha particles (see above) to become neptunium-237.

The plutonium 241 is formed in any nuclear reactor by neutron capture ultimately from uranium (actually U-238), such as supplied on the world market for electricity generation. The detailed steps are:

This will decay (emitting a beta particle) both in the reactor and subsequently.

It is of interest (and some significance in recycling spent fuel) that if too much Am-241 builds up in plutonium separated from spent fuel, it cannot readily be used for mixed oxide (MOX) fuel because it is too radioactive for handling in the normal MOX plant. For instance, British Nuclear Fuels at Sellafield, UK, can handle plutonium with up to 3% Am-241, hence up to 6 years old (any more would need special shielding).

Regulation for smoke detectors may be in relation to both health and reliability. For instance, the Australian Standard AS3786 Self-contained Smoke Alarms requires domestic smoke detectors to be labelled:

Disposal of individual units can be in normal household garbage which goes to landfill.1