The fourth instalment of the Principles of Fire Safety series looks at smoke, gas and flame detectors. Again, research and development has continued to improve well established detection technologies and provided an array of new technologies to improve fire detection while also being less susceptible to the causes of false alarms. 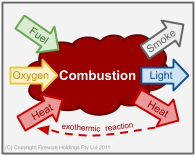 Before we go any further it’s important to lay the foundation for what is fire; fire also known as combustion is a sequence of exothermic chemical reactions between a fuel and an oxidant accompanied by the by-products of combustion being; heat, smoke & electromagnetic radiation (light).  Personally I think an illustration explains this chemical reaction in terms easier to understand.

It is also important to recognise that smoke is an aerosol or mixture of particulates suspended in air that comprises a collection of airborne solids, liquid particulates and gases emitted when a material undergoes combustion.

Before we go on to explain the operation of the ionisation and photoelectric smoke detectors, it is important to explain the inherent features of the overall design of the detector enclosure.  These detectors are designed to regulate the flow of air through the detector and eliminate or reduce the possibility for ingress of foreign matter and insects.  These features help to reduce false alarms and improve the performance of smoke detectors.

An ionisation type smoke detector  is the earliest form of smoke detection originally developed by Swiss physicist Walter Jaeger in 1930. The ionisation smoke detector operates on the principle that, under normal circumstances, air in a chamber is ionised by the radioactive element (Americium 241) which causes the free and equal flow of electrons between two adjacent electrodes.  When smoke particles enter the chamber between the electrodes, the normal flow of electrons is interrupted causing an alarm actuation.

The ionisation chamber is very sensitive to temperature and air pressure, which is overcome by having a second reference chamber.

For applications where slow smouldering fires are likely it is normally recommended to use a photoelectric smoke detector.

When visible smoke particles enter the chamber the projected light is scattered in all directions.  When this scattered light is detected by the receiver it will activate an alarm.

Photoelectric smoke detectors are more effective with visible particles of combustion however with modern electronics their performance to very low quantities of smoke can be improved while maintaining a relatively consistent immunity to deceptive phenomena.

It has been historically been common to use an alternating combination of ionisation and photoelectric smoke detectors in the path of travel to an exit due to their distinct performance characteristics.  A proposed alternative to this arrangement is the use of a photoelectric smoke detector combining a heat detector as a multi-sensor detector for improved performance for fast flaming fires.

A projected beam smoke detector (beam detector) also operates using a combination of focused light transmitter and light receiver. Some modern systems integrate the transmitter and receiver into a single housing, with an opposing retro-reflective surface (prism) to return the beam to the receiver.  A beam detector operates on the principle of obscuration being that an alarm state occurs when the light beam is attenuated (reduced or interrupted) by the presence of smoke.

Beam detectors are designed to operate over long distances typically up to 110 metres and require a straight uninterrupted direct line of sight. Typical uses for beam detectors include warehouses, hangers, etc with long spans where multiple point type smoke detectors would be considered impractical.

Video smoke detection (VSD) is a relatively new technology and is primarily used for asset protection.  Video smoke detection comprises three main components; a video camera, a dedicated computer and specialist software for image processing. This design means that the existing building video cameras may be used to provide the source video signal for software processing.