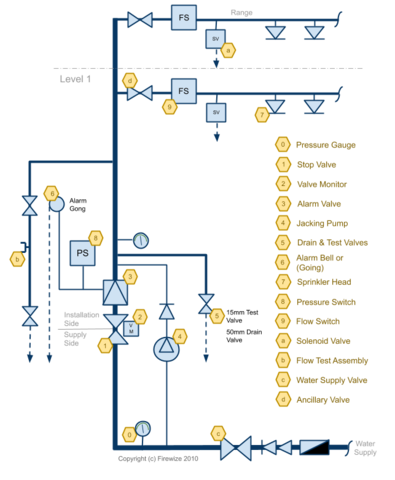 In addition to this there are additional components that support this arrangement including a Valve Monitor, Pressure Switch and Flow Switch.

The illustration to the right shows each of these components, and the approximate location within the arrangement.

This illustration shows only one type of fire sprinkler system however there are other types including;

Purpose of each component

Normally a wet pipe automatic fire sprinkler system, is fully charged with water coming from a known reliable water supply. The installation is pressurised with the alarm valve secured in the open position. When a fire sprinkler is exposed for a sufficient time to a temperature at or above the temperature rating of the heat sensitive element (glass bulb or fusible link) it releases, allowing water to flow from only the affected sprinkler. Additional fire sprinklers may also operate if they too are exposed to sufficient heat.

When this occurs water from the water supply will pass through the alarm valve to the affected fire sprinkler and also past the alarm bell. The resultant pressure drop will also activate the alarm pressure switch, which in turn will activate an alarm calling the fire brigade.

The water supply may be isolated (stopping the flow of water to the affected fire sprinklers) by closing the stop valve.