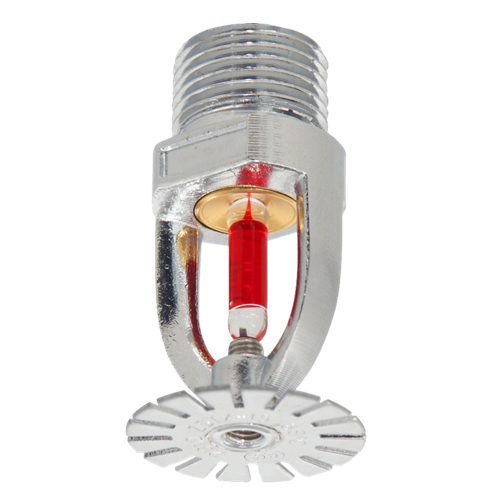 The idea of having water at the ready can be a concern to some due to the prospect of water damage. It is increasingly recognized that less water is needed to suppress small fires than large fires, and that a sprinkler system typically uses less than one-tenth the water to control a fire than the fire department would use in a non sprinklered building. But what happens if there is accidental leakage from the automatic fire sprinkler system?

The fire sprinkler industry takes many precautions to ensure than accidental leakage does not occur. Automatic sprinklers and other system components are tested and listed a range of authorities such as Underwriters Laboratories ("UL") and Factory Mutual Research Corporation ("FM") to make sure that these devices are not prone to leakage.

Component designs are typically tested for integrity at four to five times the maximum water pressures they will see in service, and every single sprinkler is tested at twice its maximum service pressure before it leaves the factory. As a final step in the installation process, the entire sprinkler piping system is also tested under an elevated pressure for a two-hour period, and any leaks must be located and corrected.

There have been some instances where the performance of an automatic fire sprinkler has been so efficient that it is not immediately apparent that a fire took place. But if an automatic sprinkler has discharged water in the clear absence of a fire, an investigation should be undertaken to determine why the sprinkler operated. In almost all cases, a reason can be found. Typically, the reasons include inadvertent overheating, freezing, mechanical damage, corrosion, or deliberate sabotage.

Automatic sprinklers respond to heat, and cannot differentiate between "good heat" and "bad heat". Where sprinklers are located very close to unit heaters, under skylights and in other areas exposed to high heat, the applicable Standrad require that higher temperature rated sprinklers be used.

If new sources of heat are added, a qualified contractor should be hired to make the necessary modifications. Temporary heat-producing sources such as construction lighting and television cameras have also been known to activate sprinklers.

Although special types of sprinkler systems are available for use in areas subject to freezing, most sprinkler systems are wet pipe systems, meaning that the piping is normally filled with water. If a system or even a small portion of a system is exposed to freezing temperatures, water in the piping can turn to ice, expanding in volume and producing thousands of pounds of pressure. Such pressures can break fittings, but can also force open the valve caps of sprinklers, resulting in apparent accidental discharge or leakage when the system subsequently thaws.

The frame, the seat and the operating mechanism (solder link or glass bulb) of an automatic sprinkler together form a sealed unit that is expected to maintain its integrity, but also to operate efficiently if a fire ever threatens its protected area. The sprinkler parts are joined somewhat like a coiled spring, holding the energy needed to activate when released by heat from a fire. Mechanical impacts to sprinklers can result in damage and separation of parts.

Special wrenches are often required by the manufacturers' literature to reduce the possibility of slippage that can damage the sprinkler operating mechanism, potentially resulting in a release of parts weeks or months later. Building renovations can also result in impacts of sprinklers, leading to an inadvertent discharge or leakage at a later date.

Corrosion can result in a weakening of parts, and a subsequent release of water. This can occur among very old sprinklers, or sooner with sprinklers installed in a harsh environment. Australian Standard AS1851 requires that sprinkler heads be inspected for "any condition likely to adversely affect their operation"  In these cases, it is recommended that the building owner replace these automatic fire sprinkler heads to avoid any unplanned activation.

Deliberate acts of sabotage must also be considered when investigating the reasons for sprinkler discharge. Vandalism and insurance fraud have been found in the past to be motivations for tampering with sprinklers.
Manufacturing Defect

The likelihood of an automatic sprinkler opening in the absence of the above reasons was historically found to be extremely low - on the order of one per year per sixteen million sprinklers in use. These statistics were based on the use of traditional sprinklers, however, not the more sensitive sprinklers of today that feature lighter operating mechanisms for enhanced fire performance.

Although very rare, the possibility of a manufacturing defect can be considered when all other potential reasons for inadvertent operation have been ruled out. This could take the form of a problem in loading or tolerances on the parts. The sprinkler manufacturer should be contacted, and arrangements can be made for professional analysis.

Analysis of the reasons for an unexpected sprinkler discharge

Salvage of all sprinkler parts!!

Complete observation of the surrounding physical environment. The history of the sprinkler is important. For newer sprinklers, this includes the conditions under which it was shipped to the job site, stored and installed. For sprinklers that have been in service for some time, the conditions of use include the possibility of damage from materials handling equipment, the potential exposure to freezing conditions, and the possibility of temporary heat sources.

Following an unexpected operation of a fire sprinkler, prompt and thorough collection of parts and data can mean the difference between an unexplained mystery and a documented problem. Better understanding of the reasons sprinklers operate accidentally will help ensure that fire sprinkler systems are there when needed to protect lives and property.

The Australian standard AS1851 require building owners remove and test a representative sample of insitu fire sprinklers. This test is designed to test the sprinkler heads in laboratory conditions to identify the unacceptably high failure rates.

Firewize can carry out the removal of the sprinkler heads for testing and arrange for the laboratory test to be performed. Contact your account manager or sales person for more advise.