For many of us, the first time we learn about an emergency, is when we hear the telltale signs of an emergency warning system in operation.

The term emergency warning systems is used in this article as a generic term used to describe a three types of systems described in the Building Code of Australia (BCA) as follows;

Emergency warning systems alert occupants in an emergency by broadcasting a warning message or tones over a network of monitored loudspeakers. Speakers are distributed throughout a building to ensure;

A building occupant warning system can be one of the following;

These systems may be supplemented by additional visual or tactile signals to augment the emergency evacuation signal.

A sound system and intercom system for emergency purposes in different to a building occupant warning system. These systems are typically installed where the building satisfies one of the following;

Historically these systems were also described as an emergency warning & intercommunication system (EWIS).  This term and the relevant Australian Standard AS2220 have however been deprecated in favour of a “sound system and intercom system for emergency purposes”.

A sound system and intercom system for emergency purposes must be designed in Accordance with the requirements of Australian Standard AS1670.4 and AS2220

The control and indicating equipment that forms the ‘brains’ of an emergency warning system generally comprises the following components;

Each manufacturer of sound and intercom system for emergency purposes differentiates themselves from other manufactures by the features and layout of the user interface.  The following illustration shows a typical interface with two distinct sets of controls; 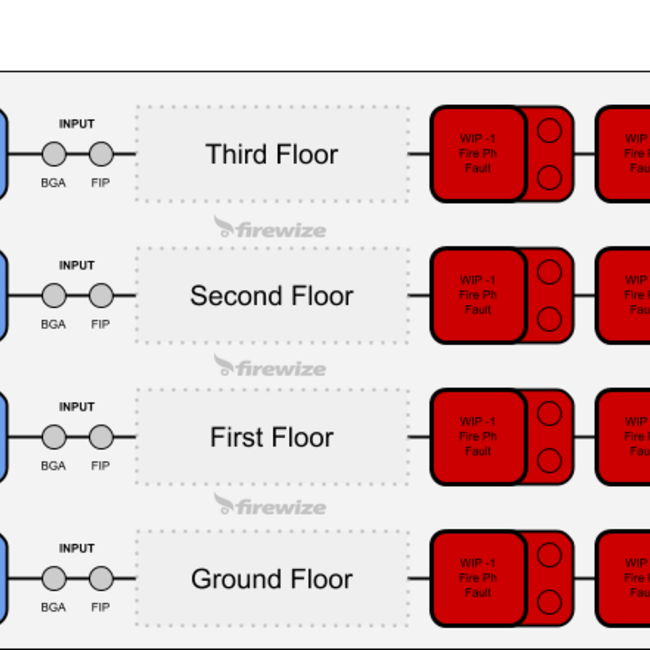 The horizontal rows in this configuration illustrate an evacuation zone.

According to Australian Standard AS1851.4-2004, an evacuation zone is a subdivision of the premises that can be evacuated separately from any other subdivision.

Loudspeakers can be purchased with a two or three power settings, also measured in watts.  The greater the number of speakers, the greater the power requirements (demand) on the amplifier.

Typically loudspeakers are permanently fixed into position and distributed throughout the evacuation zone within a building typically at ceiling height in quantity and distribution to satisfy two criteria;

Loudspeakers connected to an emergency warning system are generally connected in a parallel to the control panel with an end of line (circuit) device (typically a resistor).

In the measurement of loudness, an A-weighting frequency filter is commonly used to emphasize frequencies around 3–6 kHz where the human ear is most sensitive.  A-weighting attempts to match the response of the human ear to noise and A-weighted sound pressure levels are labeled dBA.

Intelligibility is a measure of the degree to which speech can be understood. Intelligibility is affected by many factors including spoken clarity, explicitness, lucidity, comprehensibility, precision, quantity & quality of speakers, area acoustics and background noise.  Developed in the early 1970’s, the Speech Transmission Index (STI) is an machine measure of intelligibility whose value varies from 0 (unintelligible) to 1 (excellent intelligibility).

Operation of an Emergency Warning System
An emergency warning system is generally configured to be activated automatically on an alarm signal activated by;

On receipt of an alarm signal, the emergency warning system is typically activated as follows;

Sound systems for emergency purposes may also be fitted with verbal messages to provide additional warning to occupants. These messages may also be configured to assist occupants in multi-lingual environments.

These systems may also be used for non-emergency purposes such as public address, or background music. In these cases, the systems is designed in such a way as to ensure the CIE can override these features in an emergency condition.

NOTE:    Where electronic sounders are used as part of an occupant warning system, sounders should be tested for the purposes of maintenance in a similar way as amplified sound systems producing an evacuation signal in accordance with AS1851.